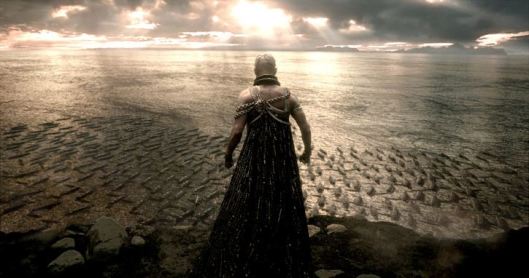 Oh, the joys and sorrows of being an insomniac.

So – after seeing ARRIVAL my mind is a-buzzing and I can’t sleep. I do the usual routine, a cup of hot chocolate and a book. This time I pick up Michael Billington’s THE 101 GREATEST PLAYS. I have long been an admirer of this UK theatre critic, and even was fortunate to have met him once. He was also a fan of the DRAMA CENTRE, the drama school in London I attended, due to its repertoire of plays, which were often unperformed great classical plays.

It is a lamentable fact but true that the depth and range of the classical theatre, East and West, is very often ignored. Indeed a great deal of World Drama isn’t seen. I recently referred to this in a STAGE WHISPERS review about the plays of Terence Rattigan, and how when you look at the repertoire of plays by our major theatre companies you will not find any Rattigan – this is despite his continued popularity in the UK. Michael Billington includes Rattigan’s THE DEEP BLUE SEA in his 101 GREATEST PLAYS.

Rattigan is not the only absentee – there are many others – nonetheless, every now and then there will be one, but usually one that has been seen before and is an old favourite, such as Moliere’s brilliant satire TARTUFFE, recently produced by the SA Theatre Company, and another play Billington includes in his 101.

Billington’s list is designed to stir up debate, to be deliberately provocative in order to encourage discourse – a brave move these days; but he is a terrific and extremely knowledgable and well experienced theatre critic, and is someone who I try to emulate in my recent theatre criticism for STAGE WHISPERS. His criteria is essentially two-fold – 1. the play is a successful comment and reflection of the historical context in which it was first performed, and 2. that the play has continued to have an after-life, and is still performed, still speaking to and reflecting modern concerns – ‘a great play is both and expression of its time and open to multiple reinterpretations’.

Billington is ‘drawn to plays which display moral ambivalence, are rooted in close observations, blend the tragic and comic and exude the life and energy that Baudelaire thought were the preconditions of any work of art’. I think I am too. He openly admits that his 101 are from the ‘Western’ canon due to a lack of knowledge of ‘Eastern’ drama. He has not included Beckett’s WAITING FOR GODOT, because he feels it no longer had the power to shock or surprise (I don’t agree), nor Shakespeare’s KING LEAR because it is too ‘structurally unwieldy (also, disagree); and was somewhat disappointed that he did not include Tony Kushner’s ANGELS IN AMERICA amongst the plays at the end of the 20th Century – but be that as it may.

Each of the plays selected is accompanied by a short essay that is informative as well as provocative – beginning with Aeschylus’ THE PERSIANS (c. 472 BCE), which is generally regarded as the very first play in the ‘Western’ canon.

So – I read his essay and somewhat intrigued got out of bed, found an old copy of THE PERSIANS and re-read it. Terrific.

Billington sees THE PERSIANS as a truly remarkable play in that it deals with an historical event that was within living memory of those who first saw the play, namely the massive and decisive defeat of the invading Persian navy under King Xerxes by the Athenians in the Battle of Salamis in 480 BCE. Herodotus, ‘the father of history’, is the primary source for the Greco-Persian Wars, but he is not very specific about what happened at the Battle of Salamis, one of the pivital battles of ‘western’ history and humankind; in fact no one really knows what exactly happened.

What we do know about Aeschylus, however, is that he fought the Persians at the Battle of Marathon (490 BCE), and may have been at the Battle of Salamis. Subsequently, Aeschylus’ account via the character of a Messenger in THE PERSIANS is a grateful addition or impression, but again not very specific.

The recent film 300 – RISE OF AN EMPIRE (2014) gives a somewhat fantastical version of the Battle of Salamis, but I wouldn’t take it in any way as historically accurate.

What is also remarkable about the play, according to Billington, is that it told from the defeated Persian perspective, and is something that would have been unpredicted as well as challenging to the original Athenian audience. Billington takes the humanist line in that the play would have established a relative empathy and pity for the defeated Persians. Whilst this may be true, honouring the classical cathartic purpose of Greek tragedy, namely Aristotle’s ‘pity and terror’, it is only one half of the play’s possible meaning – there is ‘pity’ for the Persians, but there is also the ‘terror’ to be considered.

THE PERSIANS is a warning. The Battle of Salamis, and the subsequent Battles of Plataea and Mycale effectively ended Persian domination of mainland Greece. Macedon revolted, and the formation of the Greek ‘Delian League’ saw the Greeks, under Athens, take the offensive to drive the Persians out. Well and good, but this also marks the lead up of THE PELOPONESSIAN WAR that was to dominate 5th Century BCE Greece, particularly Athens and Sparta, climaxing with Athens’ defeat in 402 BCE.

As with later anti-war plays, such as Euripides’ TROJAN WOMEN (415 BCE), Aeschylus’ play presents a nightmare vision of an earthly hell due to war. You may feel ‘pity’ for the Persians, but you sure as hell wouldn’t want this nightmare to happen to you – the ‘terror’ of defeat and devastation – and yet, is something that could so easily occur considering the fickleness in the fortunes of war. Throughout history there have been numerous so-called super powers who suddenly suffer an unexpected and devastating defeat due to a number of relative different reasons; e.g. the Spanish Armada in 1588, and the Russian Navy by the Japanese in 1905, as well as the USA in Vietnam in the 1970s. You just have to turn of the TV to watch footage of devastated Syria to capture the ‘terror’ inherent in THE PERSIANS.

The play is a lament, a massive lament about hubris and what happens if you defy the Gods, as it would seem King Xerxes has done. This is also a warning – a terrible warning – disobey and/or dishonour the Gods and you have had it – they will take revenge on you and punish you – hubris; or if you like ‘kharma’.

There is, however, something more that Billington points out in his short essay, and that is the inclusion and influence of the Athenian ‘war cry’ as told by the Messenger – ‘Liberation! Sons of Greece, to battle! For the freedom of your homeland, your children and your wives – fight! For your ancestral gods, your forefathers’ graves; all or nothing! Now is the time! Strike! All is at stake!’.

This passage, as Billington notes, has had a ‘long after-life’; inspiring the French national anthem ‘La Marseillaise’, as well as the ‘Romantic’ English poet, Shelley, to write his drama HELLAS, which is prefaced ‘We are all Greeks…our laws, our literature, our religion – all have their roots in Greece’.

Whilst the ‘romantic’ nature of all this may stem from Billington’s observations and personal tastes, nonetheless, drawing attention to this particular passage also stimulated in my mind and imagination other things that connect to the world wide web of human experience, understanding and action.

Partly due to recently directing the play EXTREMITIES by William Mastrosimone, I have recently been contemplating the question, ‘What would you die for?’ or ‘What would you kill for?’. In our ‘modern’ world here in Australia we don’t really deal with this on an everyday let alone ‘bigger picture’ perspective. The very notion that something like what has happened to Syria could happen here is regarded as ridiculous. However, this is a complacency. Our forefathers and mothers went to war, the 2nd World War in particular, to defend democratic principles and defeat the forces of Nazism and Facism – would we do this today? I don’t know – but to be frank, based on experience, I am not confident that many would rally in the name of democratic freedom and principles.

Furthermore, the cry of ‘All or Nothing’ is one that finds a resonance with Ibsen’s BRAND (1865), a brilliant and challenging play that is also one of Billington’s 101 GREATEST PLAYS. It is also a particular sentiment that finds expression in Ayn Rand’s THE FOUNTAINHEAD (1943), one of the most important and influential US novels of the 20th Century. It is a bit of a frightening philosophy, the ‘All or Nothing’ way of life; quite ruthless in many ways. Nonetheless, it is still very much a part of ‘modern’ existence, and finds its first dramatic expression in THE PERSIANS.

I heartily recommend a re-reading of Aeschylus’ THE PERSIANS, not just because it is the first play in ‘Western’ drama, but it is also quite simply a terrific play with a lot to say about the modern human condition.

It is, however, a relatively ‘wordy’ play – there isn’t much action. but the characters are terrific, especially Queen Atossa, the Messenger who relates the story of the defeat at Salamis, the Ghost of King Darius, and his son King Xerxes. It would seem from contemporary reviews that the most successful ‘modern’ productions utilize the Chorus with striking visual movement and choreography to enhance the relative non-action but respective relating of events and laments. The pixs that are attached to this post are from various ‘modern’ 21st Century productions from Greece and the USA.

This piece is what I hope will be a continuing series as I slowly work through Billington’s 101 GREATEST PLAYS. Having quickly glanced at the 101 i am somewhat relieved to state that I have actually read and/or seen all the plays listed.