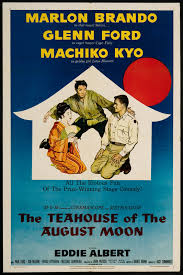 THE TEAHOUSE OF THE AUGUST MOON

Tonight I watched THE TEAHOUSE OF THE AUGUST MOON, a 1956 American film comedy based on the play and book of the same name; all of which were very successful at the time. I have long been aware of this play and film, and its success and importance in American drama, but this was the first time that I had ever actually sat down and watched it through. It was also of great interest to me – being a Marlon Brando fan – to watch Brando’s attempt at a complete transformation. 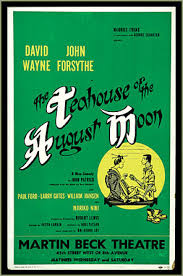 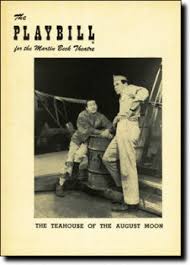 THE TEAHOUSE OF THE AUGUST MOON by John Patrick, based on the 1951 novel of the same name by Vern Sneider, opened on Broadway 15 October 1953. It was a great success, winning numerous awards, including the Tony and the New York Drama Critics for Best Play, as well as the Pulitzer Prize. David Wayne won the Tony Award for Best Actor for his performance as the Japanese interpreter, Sakini. The subsequent film in 1956 featured Marlon Brando as Sakini, with Glenn Ford as Captain Fisby, and Machiko Kyo as Lotus Blossom, a Geisha. Whilst Brand and Ford may be relatively well known, Machiko Kyo may not be – not until one is reminded that she is the female lead in Kurosawa’s RASHOMON (1950); this was to be her only non-Japanese film, and stands in contrast to most of her work.

Standing in contrast – this implies a challenge – a departure from what may have been a generally accepted public persona by a particular actor. The same is true for Marlon Brando. His Sakini must be one of Brando’s most light-hearted characters, and certainly his most successful comedy. 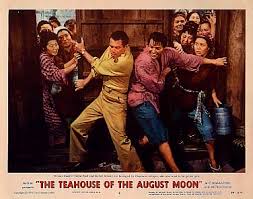 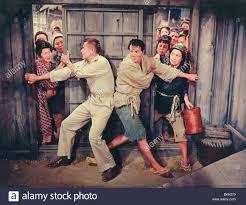 It has been customary to lam-blast this play, as well as Brando’s performance for ‘yellow-washing’. In other words, a ‘white actor’ playing an Asian character. This is still very much an issue today, part of a general push internationally for more employment and equal opportunities for non-white performers. I do not wish to enflame this debate, but rather for this once highly regarded play, and film, to be re-assessed. Why? Because it is absolutely charming, funny, joyous and touching.

Yes – yes – it is full of stereotypes, funny-little-Asian folk v crass excitable American soldiers. Yes – it is very much a product of its time – post WW2 American drama. I have written before about this period, which also saw the beginning of the Cold War, McCarthyism, HUAC, and the publication of the Kinsey Report, the first in-depth study of the sexual activities of the contemporary American male and female. As previously mentioned, in a great deal of American drama in this period, there is considerable focus on the uncovering of a secret; that something rotten lies buried within that dramatically will eventually be exposed. The same is true for THE TEAHOUSE OF THE AUGUST MOON. There is a secret – which is the actual construction of the TEAHOUSE, which is not why Captain Fisby was sent to the village of Tobiki in Okinawa – he was sent to create a schoolhouse and advance ideas of American democracy.

There is a delightful satiric edge to how both the American and Japanese characters react and relate, to each other as well as the different cultures and ideas of respectability and

honour. It’s all very light-hearted, whimsical and fun. For example, at the beginning of the film, Colonel Wainwright Purdy III (yep – that’s his name) is worried about the morals of the men n his charge. Purdy is played by Paul Ford who played the character on Broadway. Purdy has seen Officers dancing with enlisted men! He instructs his Sergeant (played by Harry Morgan) to send out a memo – ‘No officer can dance with his privates!’. Well – it made me giggle.

I don’t wish to spoil the enjoyment that still can be had from this massive hit play and film from the 1950s. It certainly can be accused, and has been, of racial stereotyping, and a whole lot of other seemingly modern-day offensive matter. However, moving through this may I offer a couple of things in its defense.

For the play and the film to be so successful there must be something more than just the whimsy associated with a light-hearted cultural clash – and there is. The story verges on tragic-comedy at the end when Fisby’s Teahouse is exposed and he is ordered to leave. The final scene between he and Lotus Blossom, with Sakini as translator, in the ruins of the recently destroyed Teahouse, is extremely moving; and beautifully played by Brando, Ford, and especially Machiko Kyo. It is about the complexity of saying goodbye to someone and somewhere you deeply love, about acceptance in regard to things that drive people apart, the importance of memory of ‘time past’, and that one is ordinary and to be happy with that.

It is not a-typical at all in context with a lot of other drama of the time; the heroics are not of earth-shaking importance, there is no grand-standing declaration of independence, ethics, morals, and human rights – it is all quite ordinary, realistic, simplistic, and tragic in its predictability – but then – magic happens.

In the true nature of classical comedy, with a wonderful deus ex machine, there is a happy ending. To be honest – despite enjoying this climatic moment in the film I think this may work better in the theatre. After being completely destroyed the Teahouse is once again fully restored due to its full beauty through the ingenuity and craftiness of Sakini and the village folk of Tobiki.

To watch this ‘live’ in a theatre would be so uplifting and exciting as well as – well – magical – joyous theatre magic!

As a side note – if any Head of a Theatre Design Department should read this – try setting this play and its design challenge to a young design student. The Teahouse is created and it must be stunning and beautiful; it then must be destroyed; and then – in a matter of a minute, for the climax of the play, it must be magically rebuilt and restored to its full beauty.

As regard to Brando and his performance of Sakini, for which he worked diligently, and respectfully, fully committing his talent and skill, I enjoyed his transformation – or attempt at a transformation. 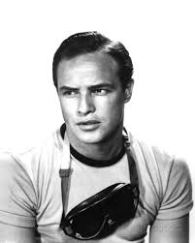 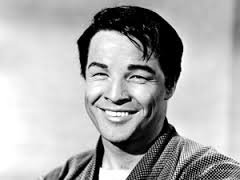 Brando had already established himself as the leading actor of his time with A STREETCAR NAMED DESIRE (1951) and ON THE WATERFRONT (1954). THE TEAHOUSE OF THE AUGUST MOON comes after DESIREE (1954) in which Brando plays Napoleon Bonaparte, and sits between GUYS AND DOLLS (1955) and SAYONARA (1957) in a kind of unique arc that involves romance, comedy and interest in Japanese culture, as well as his obvious artistic drive to transform and challenge himself with different dramatic styles and characters.

Despite modern sensibilities, there is an artistry with the actor at work, just as much as there is with Olivier’s Othello, or John Hurt’s Elephant Man, or Yul Brynner’s King of Siam. I don’t wish to offend anyone, but to censor and suppress a talented actor’s desire to transform into a character with a different racial background may be nowadays ‘politically correct’, nonetheless, it is still artistic censorship, and subsequently needs to be at least questioned. 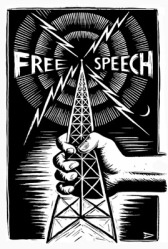 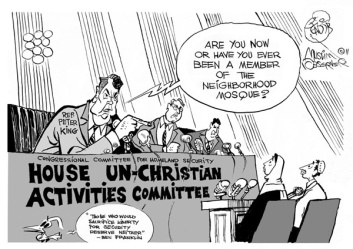 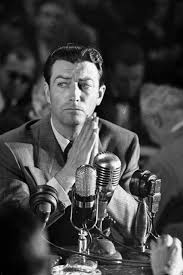 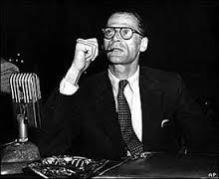 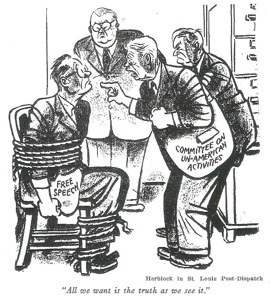 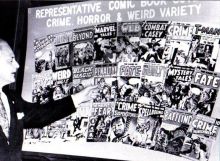 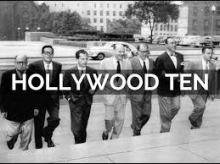 ‘It makes no difference what I say. You’ve already decided I’m guilty.’ ‘Gasp! The witch can read minds!’

You may be embarrassed and even offended by Brando’s performance – I was not; but rather fascinated (as always) with what he was going to do – how he was going to do it – and appreciating the artistic challenge. Not for all tastes, but hardly worth the outright condemnation that his performance as well as this play has earned. Whether or not this is cringe material or not, it is still worth watching – not necessarily because the transformation is successful or not but because of the attempt, the challenge for the actor, and the degree of difficulty.

But – have a look yourself – and you be the judge. I enjoyed it – immensely; and can easily see why this play and film were such big hits in the 1950s – and could be again! Why? Because it offers hope – hope for a better future, and joy in being human. 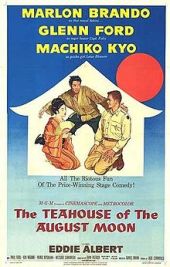 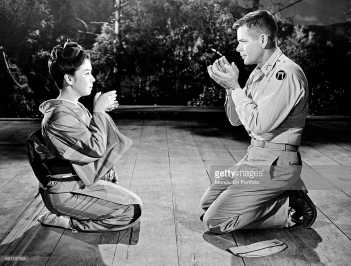 I would so love to see this play in the theatre. I very much doubt, however, that I will. The size of the cast and the cost of the design alone would be enormous. Maybe in the US perhaps, where revivals of popular old classics such as HARVEY, PICNIC, and ARSENIC AND OLD LACE have been met with great critical acclaim and popular success. This is not the case here in Australia – a different aesthetic in which ‘de-constructivist’ theatre from the 1990s still reigns supreme, and every story and set is generally about a victim caught in a waste land – not much joy I’m afraid. THE TEAHOUSE OF THE AUGUST MOON, subsequently, would be something radically different. Yes – ‘old fashioned’, but not without artistic worth, merit and success – hope and joy, and genuine theatre magic.