War for the Planet of the Apes is the third and probably final film in the recent re-imagining of this science-fiction apocalypse fantasy that commenced with publication of Pierre Boulle’s 1963 novel La Planete des Singes (Planet of the Apes).

The first film series started with Planet of the Apes (1968), directed by Franklin J. Schaffner with a screenplay by Rod Serling and Michael Wilson, and was a relatively loose adaptation of Boulle’s novel. It was a popular and critical success, seizing the imagination of a world-wide audience and subsequently spawning four other films between 1970 and 1973.

One reason for the success of this film series was the strong support and commitment given by the respective actors involved, including Charlton Heston, Kim Hunter, Maurice Evans, and in particular Roddy McDowell. Frankly, except for the first and third film, Escape from the Planet of the Apes (1971) the rest are rather forgettable and not at the same standard as those just cited, which have a psychological complexity and depth beyond the normal science fiction film.

Nearly thirty years later after the final film, Battle for the Planet of the Apes (1973) came

Tim Burton’s dark and thrilling Planet of the Apes (2001), which was essentially a re-imagining of the original 1968 film. Burton’s film was a popular and critical success, however, it was not until 2011 that the first film in this current series, Rise of the Planet of the Apes, directed by Rupert Wyatt with a screenplay by Rick Jaffa and Amanda Silver, was released. The success of this film led to the second film, Dawn of the Planet of the Apes (2014), and finally War for the Planet of the Apes (2017), both directed by Matt Reeves with screenplays by Jaffa, Silver, and Mark Bomback, and Reeves and Bomback, respectively. This new trilogy of films was inspired by Pierre Boulle’s novel, as well as the previous six films (and the 1974 television series), but is completely new take on the original concept of a planet in which apes speak and are roughly equivalent, and subsequently a challenge, to mankind. 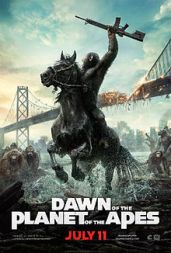 What also makes this latest trilogy of films different from previous works is not just the new storyline and given circumstances of the plot, but the art of movie-making in the 21st Century, and in particular ‘performance capture’ and the work of the actors involved who play the apes in the respective films. ‘Performance capture’ is a relatively new form in the art of acting, highly technical, extremely physically, and demanding considerable trust by the actor and director in the collaborative process. The acknowledged ‘master’ in this new form of acting is the English actor, Andy Serkis, whose roles include Gollum in Peter Jackson’s film trilogy Lord of the Rings (2001-03) and The Hobbit: An Unexpected Journey (2012),  Kong in Jackson’s King Kong (2005), Captain Haddock in Steven Spielberg’s The Adventures of Tintin (2011), Supreme Leader Snoke in J. J. Abrams Star Wars: The Force Awakens (2015), and Caesar, the revolutionary ape leader in this new Planet of the Apes series. Serkis’ extraordinary performance, along with the other actors involved, plus the stunning art direction and visual effects by Weta Digital, makes War for the Planet of the Apes an extremely pleasurable and rewarding experience – on the big screen; a significant reductive experience if watched on a small screen (although, sadly, many will watch this film on such – it is not the same experience, nor the intention of the film-makers).

In conversations I had subsequent to watching the South Australian premiere of the film last night it became immediately apparent that many of the influences, openly acknowledged by the respective film makers, were completely missed. In creating the film Matt Reeves and Mark Bomback watched and were inspired by numerous films, including Cecil B. DeMille’s The Ten Commandments (1956), David Lean’s The Bridge on the River Kwai (1957), William Wyler’s Ben-Hur (1959), John Sturges’ The Great Escape (1963), Clint Eastwood’s The Outlaw Josey Wales (1976), and Francis Ford Coppola’s Apocalypse Now (1979). All these influences (and more) are discernable to the judicious and informed movie-goer eye. Such film cross-referencing is not uncommon in the history of film,  adding to the enjoyment as well as depth of films such as War for the Planet of the Apes. One example is Woody Harrelson’s wonderful performance of Caesar’s nemesis The Colonel, inspired by Marlon Brando’s Colonel Kurtz in Coppola’s Apocalypse Now. This is no mere imitation but a respectful homage and inspirational decision. How many actually pick up on this, however, is questionable – at least in my immediate circumstances. I can only encourage you to watch these film masterpieces in order to enhance the pleasure of watching War for the Planet of the Apes; they also happen to be extraordinary films in their own right.

An even larger question is why we are fascinated, to the point of obsession, with imaginings of our own demise. This is evident as far back as The Bible with Noah and the Ark, as well as numerous classical Greek and Roman myths and dramas, exemplified by Sophocles’ Oedipus Rex (c. 429 BCE). As with Oedipus Rex there is fear of contamination and plague in War for the Planet of the Apes, which complements a similar concern in the previous two films. This fear is characteristic of numerous films, particularly those from the USA, in the 21st Century, post ‘9/11’, exemplified by the multiple zombie films and television series, such as The Walking Dead. It is as if the respective film makers, consciously or not, have tapped into a world-wide fear, and subsequently allowing for a kind of contemporary cathartic release in experiencing such dramas, guaranteeing popular and critical success and appeal at this time in the history of mankind. Why apes in this particular case is curious. However, considering our fascination and concern with our closest animal relatives, orangutans, gorillas and chimpanzees, this only adds to the complexity, depth and credibility of the entire Planet of the Apes series. We would like to communicate with them, recognising their all-too human traits – but what if they really do start behaving like human beings? It would be, at least according to these films as well Boulle’s original novel, regarded as a threat. Furthermore, War for the Planet of the Apes taps into issues of destructive and obsessive anger, and the desire for revenge; a consistent theme in world-wide human dramatic literature, exemplified by Shakespeare’s Hamlet (c.1601) and Othello (c.1603), as well as the more recent television miniseries The Night Manager (2016).

Despite the fun in recognising these influences and world-wide-web connection with other dramatic works, nonetheless, my only criticism of War for the Planet of the Apes is its length. Running at 140 minutes the film drags itself out towards the end with multiple potential endings. Subsequently, with the final film reference to de Mille’s The Ten Commandments, Caesar being like the Biblical character of Moses, denied entrance to the ‘Promised Land’, seemed a bit laboured and sentimental. This is, however, a minor point in what is overall a highly enjoyable film; although I would suggest a visit to the toilet prior to watching this film.