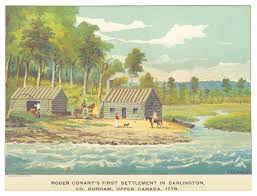 On June 4, 1789, in the middle of a Sydney winter and less than 18 months since ‘First Settlement’, the first piece of ‘Western’ theatre was produced in the new colony – The Recruiting Officer by George Farquhar. This first theatrical production in the new colony was mounted in honour of King George III’s birthday, performed by a group of unknown convicts, to an elite audience of about 60 people, including Governor Arthur Phillip, the Marine Corps officers and their wives, as well as the few ‘free settlers’, and was performed in a ramshackle convict hut. Other than this not much is known about this first theatrical production, nonetheless, there are a number of factors that remain as considerable influences on the character of the contemporary Australian actor. These include – the Play, the ‘Performing Space’, the ‘Event’, and the Actors. This series of posts will look at each of these factors and how they relate to modern Australian theatre, film, and television practice in forming the character of the Australian actor. This post concerns ‘The Performing Space’ and the influence of ‘One-Room’ Theatre.

The anniversary of his majesty’s birthday was celebrated, as heretofore, at the government house, with loyal festivity. In the evening, the play of the Recruiting Officer was performed by a party of convicts, and honoured by the presence of his excellency, and the officers of the garrison. That every opportunity of escape from the dreariness and dejection of our situation should be eagerly embraced, will not be wondered at. The exhilarating effect of a splendid theatre is well known: and I am ashamed to confess, that the proper distribution of three or four yards of stained paper, and a dozen farthing candles stuck around the mud walls of a convict hut, failed not to diffuse general complacency on the countenance of the sixty persons, of various description, who were assembled to applaud the representation. Watkin Tench, A Complete Account of the Settlement at Port Jackson, in New South Wales. London, 1793. 25.

Watkin Tench’s eye-witness account of this first theatre performance in the new colony is one of the very few that exists. What can be gleaned from Tench’s account, however, is of considerable significance. Previous posts in this series have highlighted the choice of the play, George Farquhar’s popular satiric comedy, The Recruiting Officer, and its immediate ‘modern’ relevance to the contemporary audience, and that it complemented an ‘event’. Both these issues are still relevant and influence the formulation of the Australian actor. Of even greater significance and influence, however, is that the play was performed in a convict hut, with mud walls, and ‘three or four yards of stained paper, and a dozen farthing candles. This is, in modern theatre parlance, intimate theatre – ‘One-Room’ theatre in which the demarcation between audience and actor is relatively minimal. 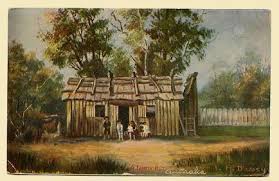 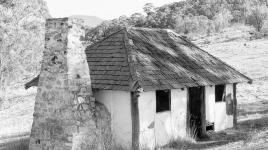 The above images are derived from a later period, nonetheless, they give the impression of what convict ‘slab-huts’ were like – they were not very big at all. It was in such a place, however, in which the convict production of The Recruiting Officer took place – intimate ‘One-Room’ theatre and performing space.

In the English theatre, it wasn’t until the mid-18th Century that the lights in the auditorium in a theatre were turned down, creating what is known as ‘Two-Room’ theatre, with a clear demarcation between auditorium and stage. This was a French theatre innovation that was taken by David Garrick and introduced to English theatre, partly in order to quieten the audience, to make them passive observers and focus on the action on-stage. By 1789, however,  this innovation was still relatively new. 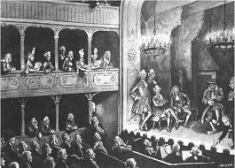 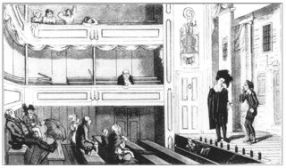 Watkin Tench’s account references the rather improvised design of the production. It is easy to overlook the fact that the particular items cited – three or four yards of stained paper, and a dozen farthing candles – were actually precious and relatively rare commodities in the new colony. There was no printing press to churn out paper, nor was there an ready and easy supply of wax for candles. In relative terms to the dreariness and dejection of their situation, this was an expensive production; a marvel that it even went on at all.

The play was performed under candle-light, which was also common practice in the English theatre. This is a much softer light on actor’s faces, and subsequently often demands heavier and more defined make-up. In an intimate performing space, candle-light can also influence gesture and physical expression; any overt and reckless gesture could knock over a candle and the whole theatre could have gone up in a blaze of fire. 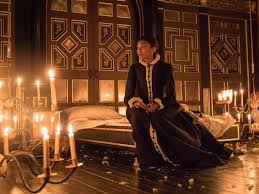 ‘One-Room’ theatre demands and exerts a considerable influence on the physical nature of performance. There is a physical, and subsequently emotional, intimacy between actor and audience. Over the years, and centuries, this steadily become a ‘cultural habit’ – and is very much a part of contemporary theatre practice. Whilst the larger proscenium arch ‘Two-Room’ theatres play a major part, particularly for commercial theatre (i.e. musicals), most Australian actors begin their careers and acting experience in intimate ‘One-Room’ theatres. The very immediacy and physical presence inform the acting style and approach – and this began with the convict production of The Recruiting Officer.

Throughout Australia in major cities and in regional communities, there is a plethora of intimate ‘One-Room’ performing spaces. These can be school halls or old buildings that have been converted into theatres. Examples include The Stables Theatre in Sydney, which originally was an old stable for horses, as well as The Bakehouse Theatre in Adelaide, which originally was an old bakehouse, and the Powerhouse Theatre in Brisbane, which was an old electrical powerhouse. There are many others – including the La Mama Theatre in Melbourne, the Hayes Theatre in Sydney, the Blue Room in Perth, and Whilst all the major subsidized state theatre companies have proscenium arched ‘Two-Room’ theatres, they also have smaller intimate ‘One-Room’ theatre performing spaces.