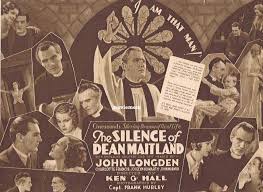 Ken G. Hall’s The Silence of Dean Maitland (1934) is not a great film, but it has something rather intriguing about it that makes compulsive viewing. Furthermore, it throws a particular mirror up to its contemporary society with certain issues still relevant today.

The film is based on the romantic melodramatic novel of the same name by Maxwell Grey (a pseudonym for Mary Gleed Tuttiett) that was first published in 1886. It was a best-seller, adapted into a play, and later two silent films in 1914 and 1915. It involves a minister, Dean Maitland who is seduced by the local sex-pot, Alma Lee who becomes pregnant. Ben Lee, Alma’s father, when he finds out physically attacks Dean Maitland, who then accidentally kills Alma’s father. Rather than confess, Dean Maitland allows his best friend, Dr. Henery Everard to take the blame. Everard goes to jail for twenty years, whilst Dean Maitland enjoys a successful life. Eventually, however, all is revealed.

There is a story that Ken G. Hall and his friend Stuart F. Doyle went to see a production of the play by The Rockdale Amateur Society in Sydney, and ended up in fits of giggles due to its overt melodramatic sentimentality. Nonetheless, Hall sensed there was something about this story that would appeal to contemporary audiences – and he was right. Despite reserved contemporary critical assessments, the respective film versions were popular successes, particularly Ken G. Hall’s 1934 film.

Today it is very awkward at times to watch, nonetheless, there is something about this story. Furthermore, despite all the melodramatic sentimentality The Silence of Dean Maitland had, and I think still has, the power and capacity to upset numerous people in religious communities and government institutions. Raymond Longford wrote and directed the 1914 film version, and ended up in court over distribution problems. It is perhaps the issue of decadence, hypocrisy, corruption, and betrayal by a supposed respected religious leader that is why The Silence of Dean Maitland has its appeal and fascination, and would, if re-made, probably be as successful and popular with Australian audiences as it has always been. A curiosity, perhaps, but there is something there….?