Welcome to NEW WORK – my photography exhibition for this year’s South Australian Living Artists (SALA) festival. My focus this past year has been on ‘Australian Naturalism’, with a couple of ‘Abstracts’ for added measure. There are 19 new photos that can be loosely divided into three areas – TOWN, COUNTRY and the SEA. 1. Brown Steel Roof – Adelaide, SA. (Sony ILCE-7). This photograph was taken on a hot summer’s day from the top of carpark looking down an old building on Franklin Street in the Adelaide CBD. The rusted steel roof with its respective lines glowed and burnished under the harsh South Australian summer sun. 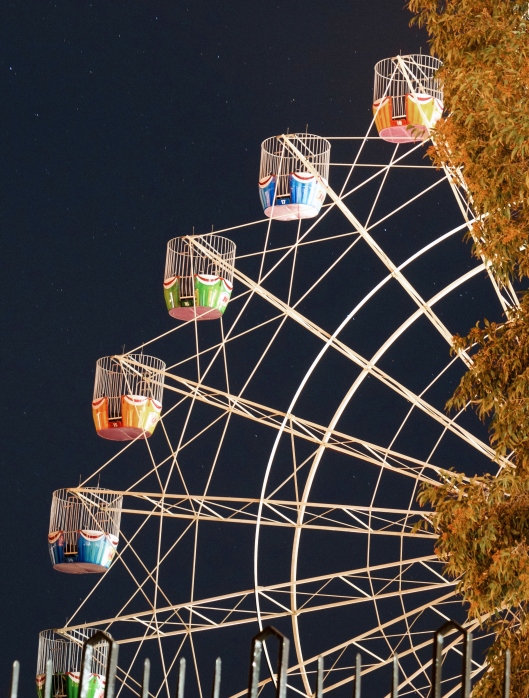 2. Topless Cupolas – Adelaide Show Ground, Adelaide CBD, SA. (Sony ILCE-7). In contrast, this photograph was taken in mid-Winter at night at the Adelaide Show Ground. It was taken with a ‘time-lapse’ of 5 minutes, which is why the stars appear like tiny streaks. The cupolas are ‘topless’ as the rather big Ferris Wheel is not in operation during the winter months. The cupolas appear to have faces. The term for this is pareidolia – seeing faces in inanimate objects and nature. As you will discover as you journey through this exhibition I am quite fascinated with the rather unique aspect and ‘leap’ of the human imagination. 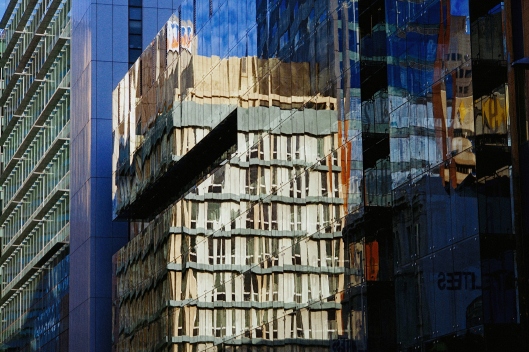 4. Abstract: Reflections – ‘Mad March’ – Adelaide CBD, SA. (Sony ILCE-7). ‘Mad March’ is the name Adelaideans give to describe the period in March every year that involves the Adelaide Fringe Festival, the Adelaide Festival, and WOMAD. From about mid-February and continuing all through March these three major arts festivals complement and compete with each other with their vast and diverse range of productions and performers from all over the world. It is a very exciting time to be in Adelaide, but it does get a little overwhelming, ‘mad’ and crazy at times. Love it. This photo was taken at the top of the same carpark as Brown Steel Roof (see above). It is apartments reflected in the glass facade of the Quest Hotel on Franklin Street in the Adelaide CBD. 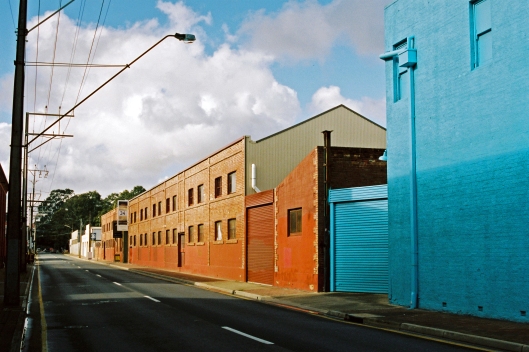 5. Cityscape: Manton Street, Hindmarsh, Adelaide, SA. (Kodak 35mm). Yes – it is very ‘Jeffrey Smart’; but not intentionally. I didn’t set out to deliberately copy the works of Jeffrey Smart, however, there are resonances. Jeffrey Smart, one of Australia’s greatest artists, captured the unique uniformity of Australian urban architecture. Subsequently, anyone concentrating on this aspect of contemporary Australian life draws comparisons with Jeffrey Smart. It is not so much Smart’s particular aesthetic but the fact that the architecture remains the same. Solid blocks of concrete, brick, glass, iron, bitumen, and cement. If comparisons are made with the works of Jeffrey Smart I take it as a compliment. This was taken on Manton Street, Hindmarsh, which can be at times a very busy ‘link’ road between South Road and the CBD. I was lucky in that I took this when there were hardly any cars. The blue building to the right is a Greek company hence the striking aqua blue colour. 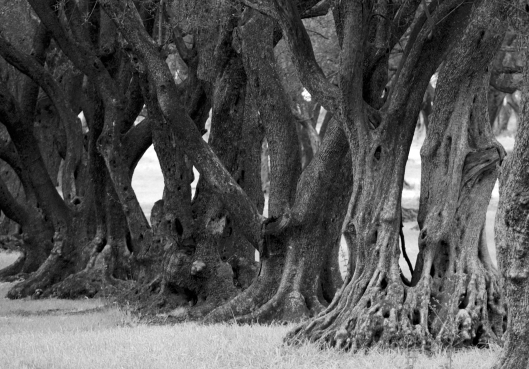 6. ‘Fangorn’ – Tree Creatures of South Australia. (Sony ILCE-7). This was taken in the oldest olive grove in Adelaide in Rymill Park/Murlawirrapurka, just off Bartels Road, Adelaide CBD. It is another pareidolia and part of an on-going series I have titled ‘Tree Creatures of South Australia (and other Fantastical Beings)’. It was the young son of a friend who gave it the title of ‘Fangorn’ after the name of the forest in J. R. R. Tolkien’s The Lord of the Rings, which he was reading at the time. 7. ‘The Poles’ – Lake Bumbunga, SA (Sony ILCE-7). The vast salt lake, Lake Bumbunga, is about 2 hours drive north of Adelaide, near the town of Lochiel. Bumbunga means ‘rain water lake’.  This place has become a popular tourist spot, especially with Asian tourists – I don’t know why. When we visited Lake Bumbunga in late spring there were three tour buses filled with Asian tourists. Lake Bumbunga is extraordinary, partly due to is size and substance, as well as colour; it changes colour per season, often given off a pink glow. These ‘poles’ stick out in the salt-lake, remnants of a by-gone time. 8. Mallee – Montaro, SA (Sony ILCE-7). Monarto is a town about 45 minutes drive to the south-east of Adelaide with a population of approximately 200 people. In the 1970s Monarto was touted as a ‘satellite city’ of Adelaide. It was to be called ‘New Murray Town’. However, this never happened. Like Adelaide, it was planned that the city centre would be surrounded by parklands. Plants and trees were imported and some were planted in various locations around the town. This photo was taken amidst the remnants of this proposed ‘parkland’ around Montaro. South Australians, especially rural South Australians love the rugged ‘mallee scrub’ that is relatively common throughout the South Australian countryside. 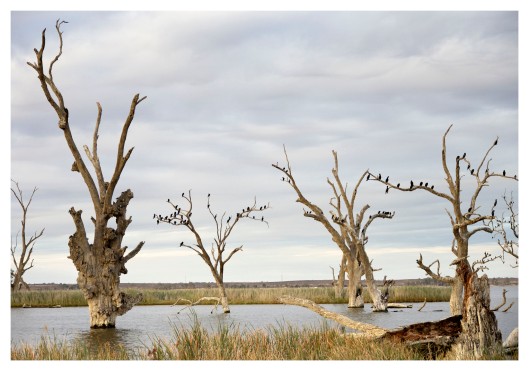 9. ‘The Gathering’ #1 – Tree Creatures of South Australia – Lake Barmera, SA     (Sony ILCE-7). Originally named by white settlers as ‘Lake Bonny’, in 2012 due to an application from local and state indigenous tribes the lake was given two official names – ‘Lake Bonny’ and ‘Lake Barmera’, and ‘Lake Bonny-Barmera’ / ‘Baremera-Bonny’. You take your pick. It is, however, a deeply spiritual place; subsequently, I prefer ‘Lake Barmera’ (the indigenous name). This is another place in which the trees elicit an imaginative pareidolia response. These old dead trees sit in the flat shallow water like ghosts, with cormorants and crows sitting on their branches as if waiting for something to happen….. 10.  ‘The Gathering’ #2 – Tree Creatures of South Australia, Lake Barmera, SA. (Sony ILCE-7). ….and something did happen, something extraordinary. As the sun started to set, it’s golden rays suddenly hit these pale ‘tree ghosts’, bringing them to eerie life. 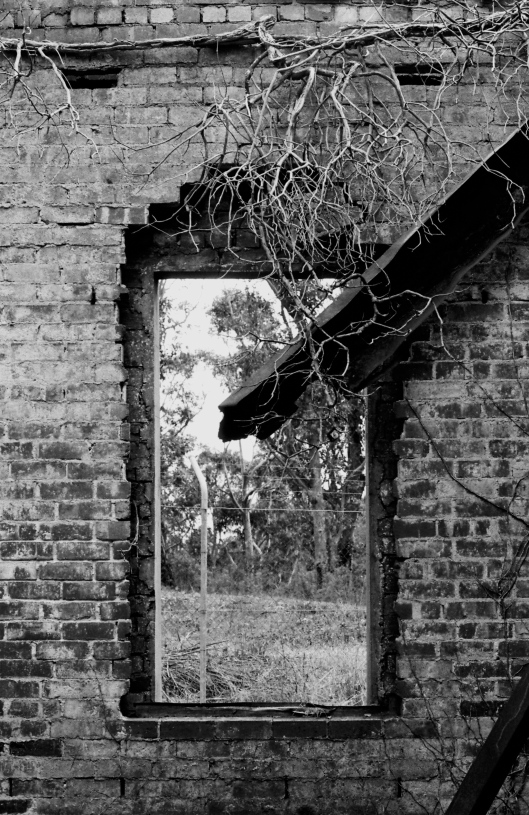 11. ‘Through a Window’ – Australian Ruins – ‘Arthurs Seat’, Crafers, SA. (Sony ILCE-7). Like many people throughout the world, Australians have a fascination with old ruins. ‘Arthurs Seat’ is a ruined old stone mansion that once upon a time as a ladies finishing school. It lies hidden from the main road in the beautiful Adelaide Hills, not far from the village of Crafers. This photo is part of an on-going series entitled ‘Through a Window’. It is through a window that one can see numerous possibilities, some good, some bad; another ‘leap’ of the imagination. 12. Autumn: ‘Dancing Trees’ – Mt Lofty Botanic Gardens, Mt Lofty, SA (Roloflex – Kodak 35mm). Autumn in the Adelaide Hills is simply stunning, a cacophony of colours, textures, and images. This photo is part of an on-going series entitled ‘Dancing Trees’. It is an attempt to capture the magical dance-like movement of trees. 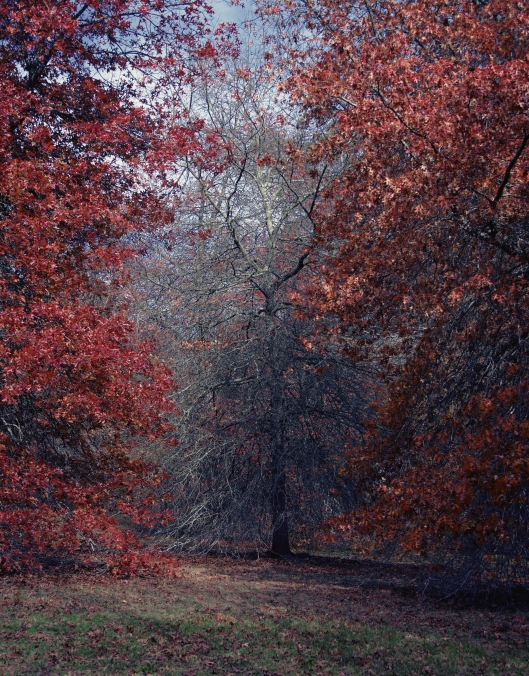 13. Autumn: ‘Enter Oberon’ – ‘Dancing Trees’ – Mt Lofty Botanic Gardens, Mt Lofty, SA (Sony ILCE-7). On another trip to the Mt Lofty Botanic Gardens late in Autumn the weather was rather wild and windy. I was crossing a clearing when a moan from the trees up the hill to my left made me turn and gasp. A ‘tree creature’, looking like a majestic stag, emerged between two other trees whose red leaves seemed fired with passion and anger. It was if, Oberon, King of the Fairies in Shakespeare’s A Midsummer Night’s Dream was making his first entrance in the play. Furious with his wife, Titania, and suffering from ‘the forgeries of jealousy’ because Titania is paying more attention to a ‘changeling child’ than to him, Oberon has come to demand that Titania lets the child go with him. 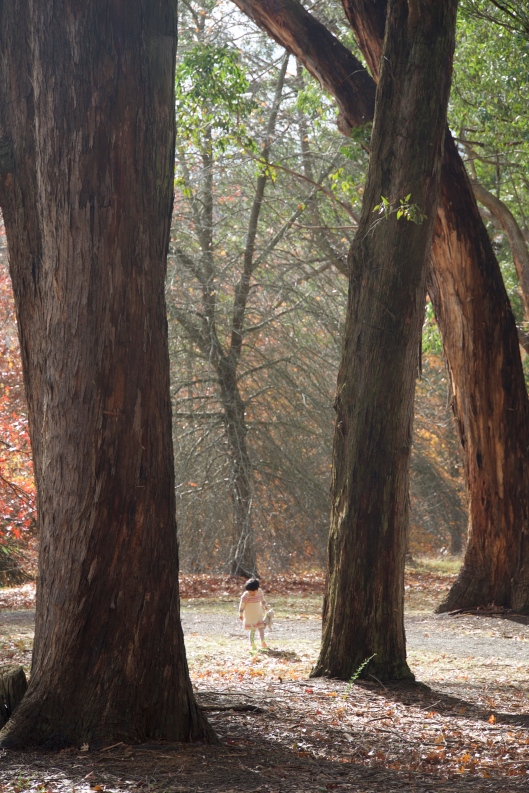 14. Autumn: ‘Babe in the Wood’ – Mt Lofty Botanic Garden, Mt Lofty, SA (Sony ILCE-7). ‘The Woods’ can mean a number of things, such as a place of change, and/or a place of wonder. This photo was a bit of luck. In late autumn I returned to the Mt Lofty Botanic Gardens in the Adelaide Hills and went looking for possible trees for the ‘Dancing Trees’ series. Suddenly, my eye was caught by this little Chinese girl who was with her parents playing a relative distance from me. Her parents kept asking her to look up in order to take a photograph. The little girl, however, was fascinated with something on the ground at her feet. Then suddenly, with a change of natural light, it seemed as if the trees towering protectively above her leaned down to have a look too. 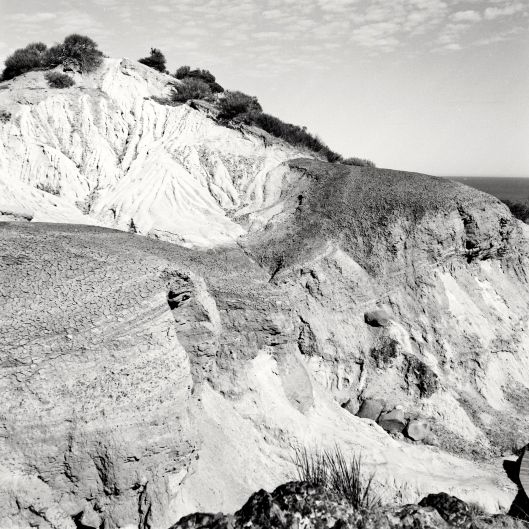 15. ‘Sugar Loaf’ – Hallet Cove, SA (Roloflex Kodak 35mm). Hallet Cove is approximately 20 km south of Adelaide.  The Hallet Cove National Park is remarkable because of the number of ‘glacial striations’ and ‘glacial erratic’ it contains, remnants of the ‘Permian’ glaciation of South Australia approximately 270 million years ago when Australia was part of Gondwana. ‘Glacial striations’ are like deep scratches cut into the rocks due to ‘glacial abrasions’. ‘Glacial erratics’ are large pieces of rock and/or boulders that have been carried large distances by a glacier and are at odds with the other rocks and bedrock that surrounds them. The most startling of these in the Hallet Cove National Park is known as ‘The Sugar Loaf’; a large white rock that looks like a volcano. It was called ‘The Sugar Loaf’ because of its resemblance to a loaf of white sugar. 16. ‘Sentinel’ – Myponga, SA (Sony ILCE-7). Myponga is a small isolated coastal village about 72km south-east of Adelaide. On the southern side of the beach are the remnants of an old jetty. The weathered poles stand like sentinels facing the small village, watchful as if waiting for something to happen. 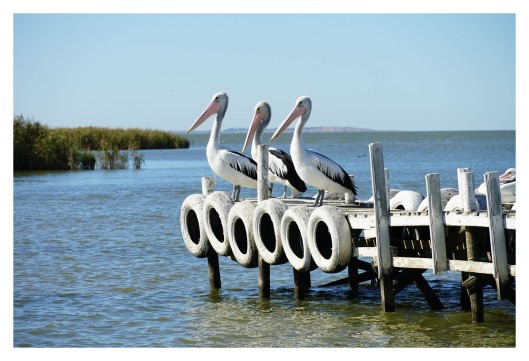 17. ‘Pelicans’ – Milang, SA (Sony ILCE-7). One of the joys of living in this part of the world is the number of pelicans that can be found basically anywhere along the coast and at lakes further inland. This photograph these four pelicans (there is a fourth partly hidden to the very right of this photograph) was taken at Milang, a small village on the west coast of Lake Alexandrina, about 75km south-east of Adelaide. As well as capturing the unique majesty of these pelicans there is also a rather intriguing play of numbers in this photograph;  for example – 6 tyres, 3 (and a bit) pelicans, 8 posts, etc. I was unaware of at this at the time I took this photo at the end of Spring 2019. 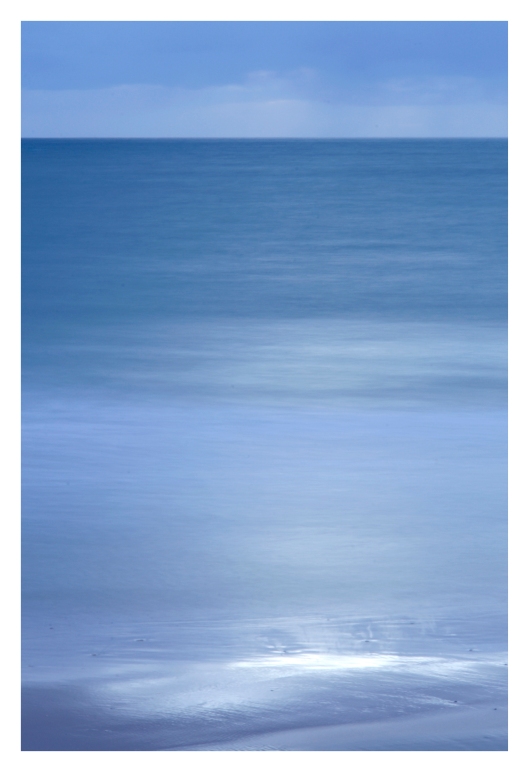 18. ‘like blue velvet’ – Henley Beach, Adelaide, SA (Sony ILCE-7). Henley Beach is one of Adelaide’s most popular local beaches. It is a rather long stretch of beach, sitting between West Beach and Grange. This photo was taken one Winter afternoon on the southern end of the beach. It has been ‘photoshopped’ to make it resemble a painting by Mark Rothko. It is intended to complement meditation and calm a turbulent soul. 19. ‘The Tunnel’ – Queenscliff, Sydney, NSW (Sony ILCE-7). This tunnel sits in the cliff face separating Queenscliff Beach from Freshwater (or Harbord) Beach. As a child and adolescent, my sisters, friends and I would often use this tunnel to move between the two beaches. Back then you could go through the tunnel and then scramble and climb across the rocks to Harbord Beach; that is now no longer possible due to the danger of falling rocks. This is the final photograph and in a way is a little at odds with others in that it is the only one not from South Australia. Nonetheless, it is also part of the on-going Through a Window series – through a window one can glimpse possibilities, some good, some bad. In his case, it is the beauty of the surf at Queenscliff Beach.

Hope you enjoyed this journey – Making the ordinary ‘extraordinary’.